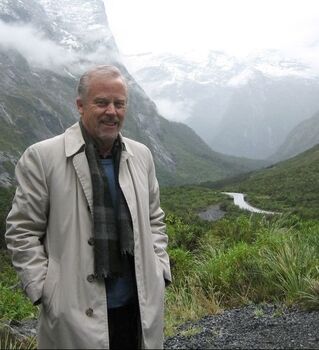 When he performed at the Moscow Conservatory, that most discerning of concert audiences gave him a ten-minute standing ovation. But one might anticipate such a response to the artistry of pianist Robert Hamilton, whose Chicago orchestral debut earned him the headline “A Major Talent” (Donal J. Henahan, former chief music critic for the New York Times).

Born and reared in South Bend, Indiana, Robert Hamilton was a prodigy at three, found early one morning playing songs on the piano with confidence and precision that he had heard his mother practicing the day before. But his musical gifts were not confined to that instrument. As a high school student, he would publicly perform not only piano concerti by Grieg, Tchaikovsky, and Liszt, but the clarinet and bassoon concerti of Mozart!

Robert Hamilton’s early performing career was expedited by three grants from the Martha Baird Rockefeller Fund for Music, which led to debuts charged with excitement in New York and the musical capitals of Europe. He also received more grants from the U.S. Department of State’s Institute of International Education than any other musician.
​
Even the New York Times took note of Robert Hamilton’s “impressive number of international competition prizes”, which earned him engagements with the Chicago Symphony, the St. Louis Symphony, the National Symphony (Washington), and other leading orchestras throughout the United States and abroad.  He would perform in remarkable venues worldwide, from Chopin’s birthplace, to Carnegie Hall and the John F. Kennedy Center, and even the White House.

Hamilton has recorded for Philips, Orion, and Summit Records, and for radio networks including the London BBC, NPR, ABC, Voice of America, Radio Warsaw, and DRS Zurich. One concert in St. Petersburg was televised and distributed nationally throughout Russia. Mr. Hamilton teaches at Arizona State University in metropolitan Phoenix, and at PianoSummer in New York.

Robert Hamilton has upheld the virtues and equaled the standards of the times of the great pianists. Never affected, and yet always exploring the outland of a work’s potential, he brings to everything he plays at least some wonderful genius thing the hearer has never heard before.